What a fun project this was!  This was my first attempt at applique, and I escaped relatively unscathed! 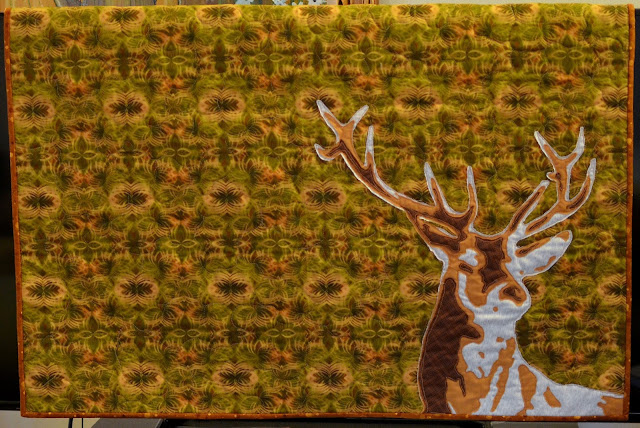 I have been admiring the works of Luke Haynes, a modern "dude quilter" for a few years now, and recently stumbled across a tutorial on Bernina's website written by none other than Luke himself.  It's a good step by step guide to how he makes his own brilliant works, such as "Hammer": 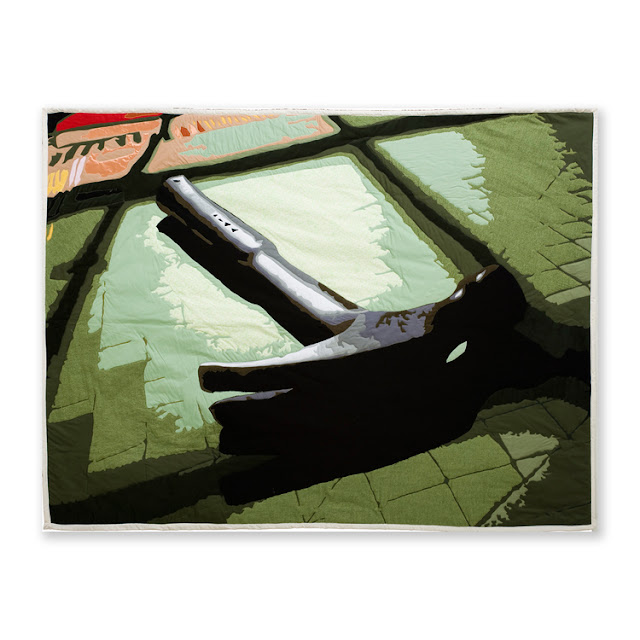 and The American Context #16: 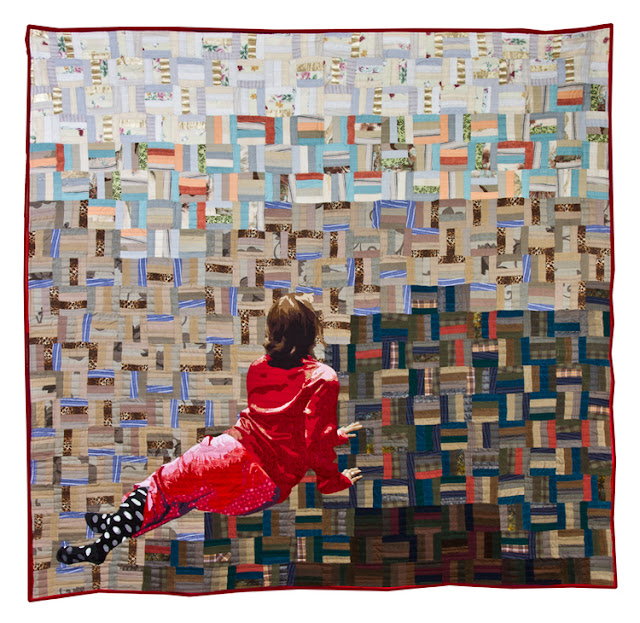 I assume he uses Photoshop to "posterize" a photo, then prints out the "map" on paper and appliqueing that image to a background.  Anyhow, I was really excited to find his tutorial, and decided this would be a great Christmas gift for my brother and sister-in-law, who needed a quilt from me, but would more likely appreciate an outdoor-sy theme like the deer.

So I'm not going to go through my whole process step-by-step, but will just hit the high points, as this was my first time with a fairly unusual method of quilting.

First off, you print out the stencil pages and tape them together, then cut out the outline of the deer ( you can see that I started that on the right side, using an Xacto knife). 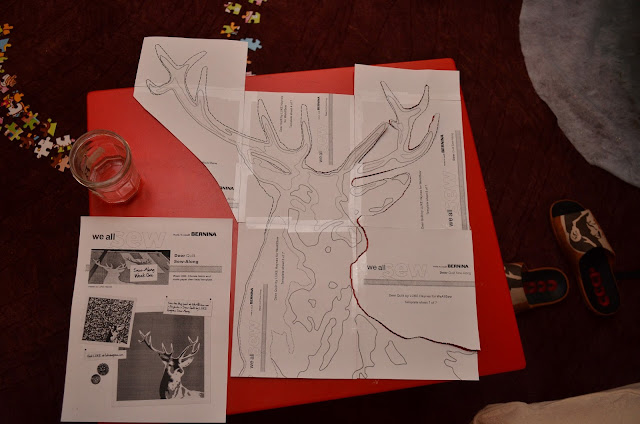 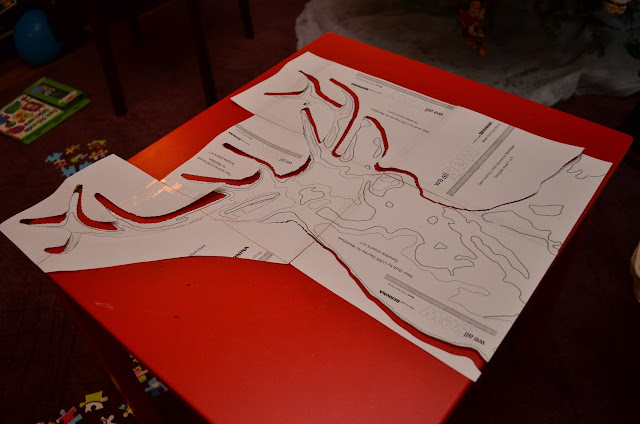 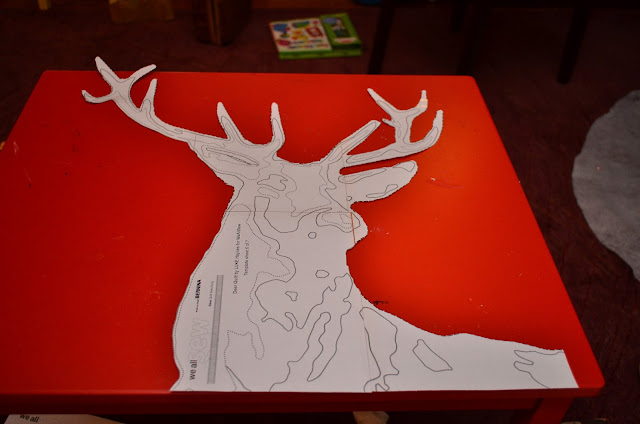 After the deer is cut out, I used it to trace my first fabric (off-white), which I cut out, then cut the dark lined pieces (which transfer to tan in the fabric), then the dotted lines (which transfer to the brown plaid).  Each successive layer is glued to the last, til you have the finished fabric deer (below). 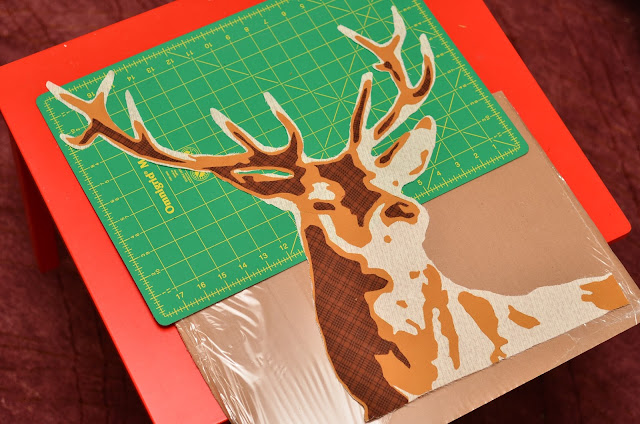 You have to be a bit careful with this, as it's not stiff and has to be supported when you move it around so the layers don't become unglued.  I laid the whole think over a cutting mat and piece of cardboard as I auditioned several different background fabrics 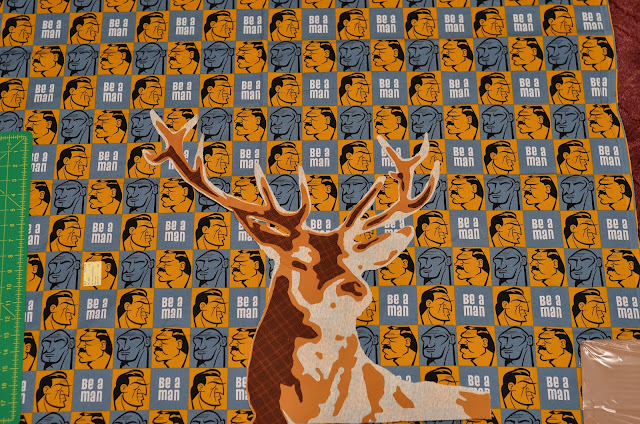 I had planned for this to be my background from the beginning.  I loved the juxtaposition of the quilt with a very "manly" image and message, since my brother's a tough-guy type who would not respond to a traditional quilt.  I decided against it, as I thought it might be too modern and edgy.  Besides, I wasn't crazy about the color combinations together. 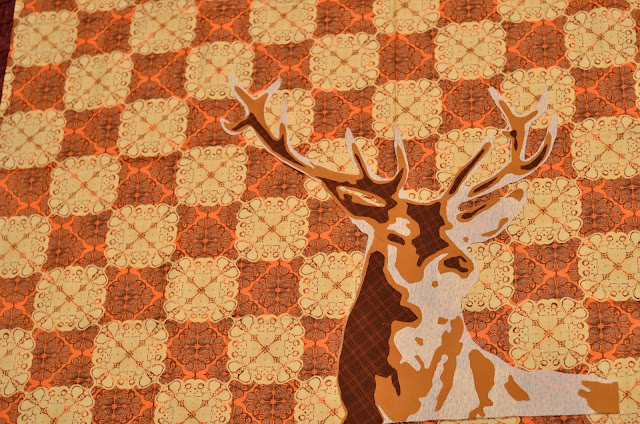 I love this fabric, and the colors were good, but felt the deer wasn't standing out as much on the right side. 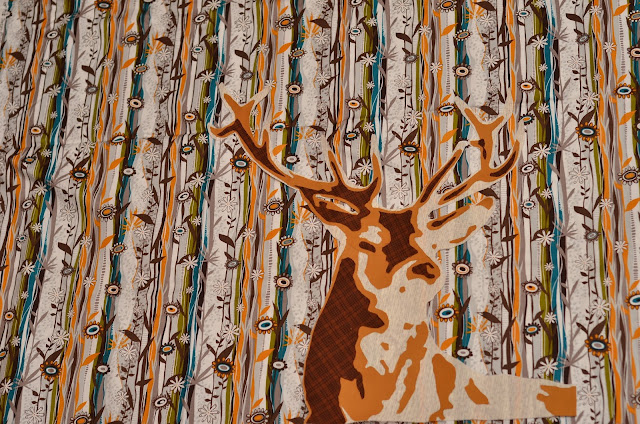 Another one of my beloved fabrics, but again, I didn't think the deer was "popping" enough, and the design (which looks a bit to me like a forest) was a bit too literal. 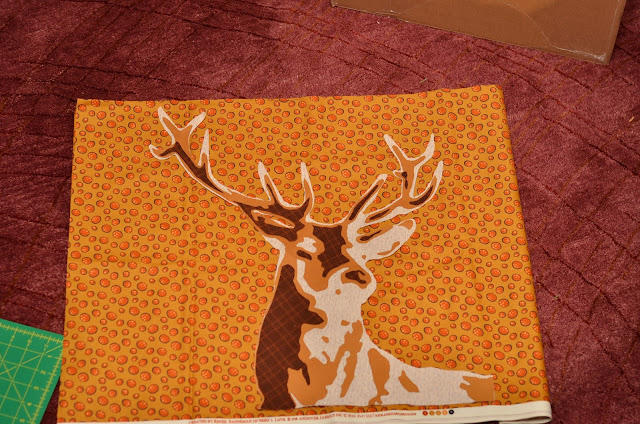 Here was another contender.  I love the color, and been waiting for the right quilt for this brown and orange fabric, but for some reason, I felt the background needed to be a bit busier. 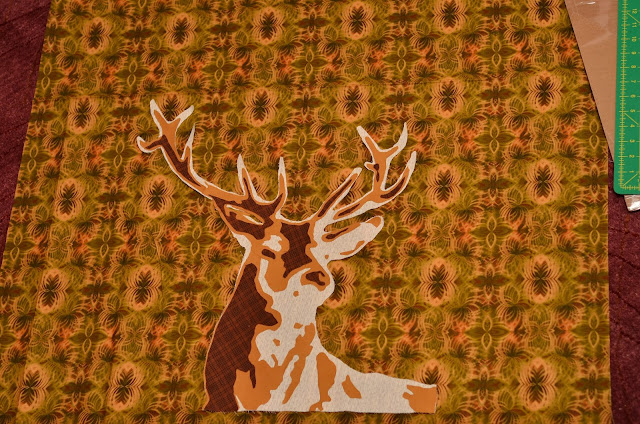 As you know, this was the winner.  The green and brown give is a woodsy feel, and the design almost evokes a plaid design, which, to me, screams "Up North". 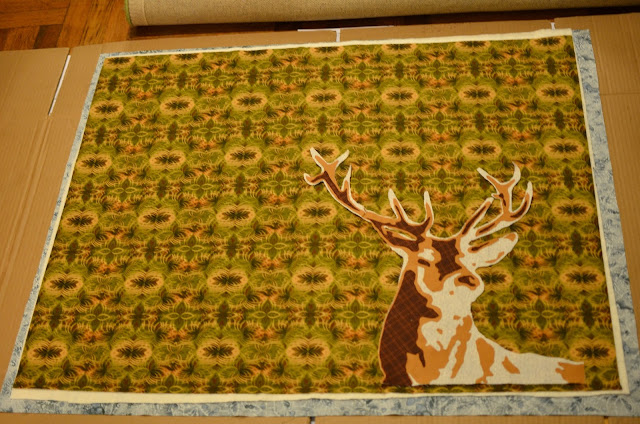 This was my first time using adhesive spray, which I mostly loved working with.  For a smaller project that I didn't have to roll up or fold to quilt on my home machine, it worked very well.  I have since spray basted a larger project, and I was occasionally getting some shifting and creasing when I rolled up the quilt to fit in the harp space.  Best traits of the spray baste is less time on your knees, no fussing with pins either before or during quilting, and big time savings.  When FMQ'ing I did get some sticky residue on the quilting foot, but a little alcohol took care of that. 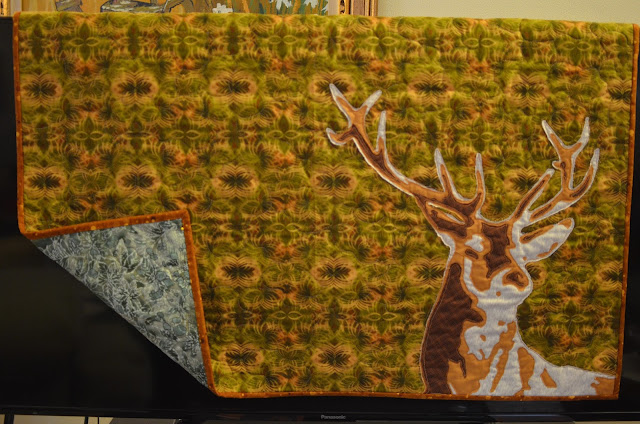 Here's the final product.  I made it a little larger (24" x 38"), but that was easy.  Backed with a nice green batik, bound with brown and a hanging sleeve for easy display.  I think they liked it, but with Minnesotans, you can't always tell ;)
Posted by Patrick at 11:29 AM

Patrick
I am an opera singer and newly-minted quilter. I live in Manhattan with my lovely wife and daughter. My profile pic is me in my "Elvis costume" for an opera I did a few years back.